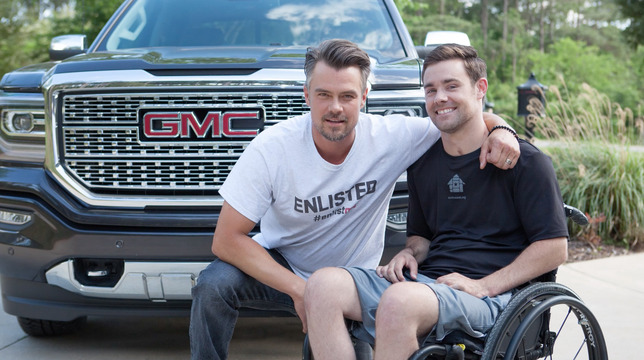 May 2016: He’s known to the world as an acclaimed film and Emmy Award winning television actor; an in-demand fashion model; celebrity husband to Fergie of Black Eyed Peas fame; and famous father to Axl Jack Duhamel.

However there’s another side to Josh Duhamel that most of his fans may not be aware of – his profound reverence and unwavering dedication to America’s military troops. This year, Josh is showing his “stars and stripes” with GMC for Military Appreciation Month.

As part of the ongoing relationship between GMC and veteran support program Building for America’s Bravest, the brand is calling on its staff, fans, and all Americans to support the foundation’s work to build life-changing smart homes for severely injured service members.

By end of this year, GMC will have donated up to $2 million dollars while requesting that all citizens nationwide to “ENLIST TO UNLIST” the more than 200 severely injured service men and women who are currently awaiting smart homes.

For more than 100 years, GMC and its parent company have supported the U.S. military working with the spirit of “Helping, Hiring & Driving” which includes a combination of employment programs, veteran support programs and offering the best possible automotive military discounts during Military Appreciation Month, which is offered to all 21 million veterans and their families.

Viewers are introduced to a few of the valiant veterans who have benefitted from the program in two emotional and uplifting videos hosted by Josh.

Discussing his passion for skydiving, Love, a triple amputee, said, “When I’m in the sky flying with my friends we’re all equals. Gravity treats us all the same.”