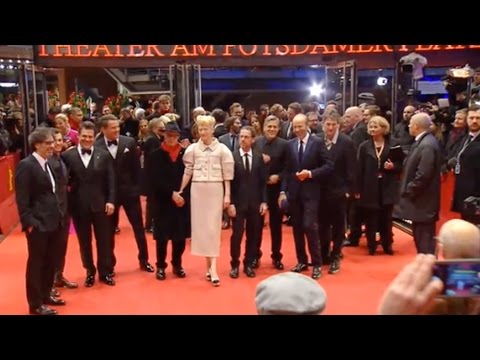 The Competition at the 66th Berlin International Film Festival is now underway lead by the red carpet premiere of “Hail Caesar” – 18 of the 23 films in the Competition programme will be vying for the Golden and Silver Bears while 19 films are world premieres.

George Clooney opened the Berlin film festival on Thursday 11 February with Europe’s refugee influx in the spotlight, saying he would meet German Chancellor Angela Merkel about lending star power to help with the crisis.

The 11-day Berlinale, one of the top three cinema showcases in Europe along with Cannes and Venice, started with a screening of “Hail, Caesar!”, Joel and Ethan Coen’s send-up of Tinseltown’s 1950s golden age.

Clooney told reporters he would meet Merkel and, separately, a group of asylum seekers Friday “to talk about and ask what messages and what things we can do… to help”.

Although the Berlinale is spotlighting around a dozen films focused on refugees, Clooney admitted it would take time before Hollywood would turn its attention to such stories.

“The unfortunate thing about the film community is we react to situations much more than we lead the way. News stories have to continue to happen and then scripts are written and it takes a couple years before people are actually making films about it,” he told global reporters.

“It’s also very difficult to just make a subject film. You have to have a reason — a character and a reason to make it.”