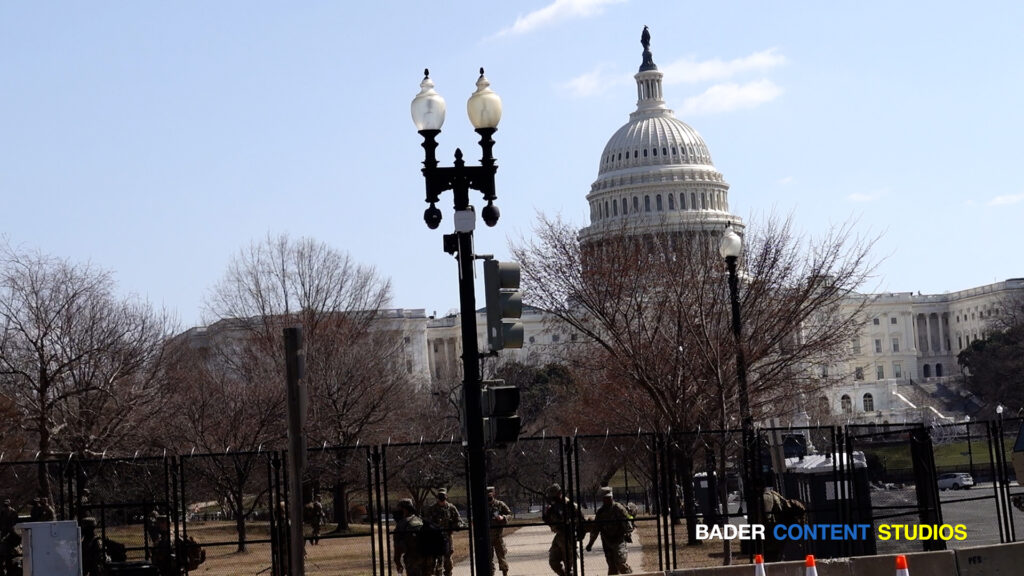 Washington DC Bader Studios was on site at the US Capitol building on Thursday March 4 along with the world’s media with the threat of violence overhead. While on the scene all day at the US Capitol complex, many stopped by to watch the US National Guard on duty on all four sides with a buffer zone of high unscalable fences with razor wire woven through the tops. During the shift change, it was believed to be more than 5,000 guardsmen on duty on rotating basis. Capitol Police said they learned earlier in the week “obtained intelligence that shows a possible plot to breach the Capitol by an unidentified militia group on Thursday, March 4.” While it was a day to test the nerves, nothing actually happened. March 4 is a significant date for the QAnon, in a cultish, mindless conspiracy theory whose unsubstantiated believe that Donald Trump was secretly fighting a global child sex trafficking cabal led by prominent Democrats. The theory continues that many believers that March 4, which was the date presidents were inaugurated until the 20th Amendment was adopted in 1933, would be when Trump would be inaugurated for another term of office. The news to come from this was the Capitol Police requested that the National Guard stay at the Capitol for at least two more months, citing ongoing security concerns. The Capitol Police have asked the Pentagon to extend the National Guard’s mission to protect the U.S. Capitol for an additional two months. Thousands of National Guard troops were dispatched to the Capitol grounds after the January 6th invasion at the Capitol. Since then, there have been about 5,200 National Guard troops stationed around the building and a tall fence has been erected around the perimeter of the Capitol grounds. The National Guards’ mission was set to end on March 12. “We should have them here as long as they are needed,” House of Representatives Speaker Nancy Pelosi told reporters at her weekly press conference. Defense officials confirmed that the request is under review at the Pentagon and that the Guard has started checking states for the availability of their troops, in an effort to be prepared if final Defense Department approval is given. The officials spoke on condition of anonymity to discuss internal deliberations. A bulletin issued by the Department of Homeland Security and the FBI said an unidentified group of “militia violent extremists” discussed plans to “take control of the U.S. Capitol and remove Democratic lawmakers on or about March 4.”