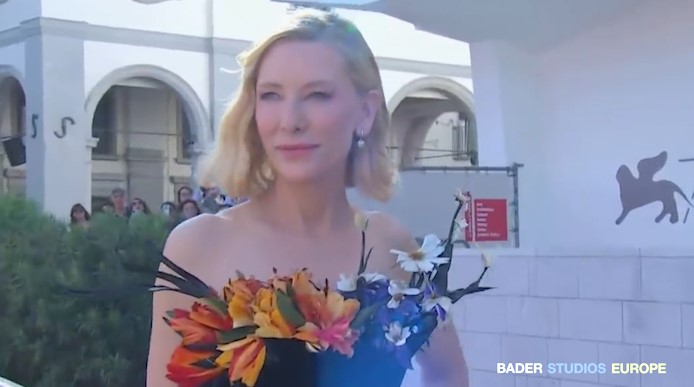 Bader Studios Europe was on the red carpet every night to talk with the stars and celebs and capture their looks upon their arrivals.

As the oldest award event in the world – there were incredible awards all led by this year’s jury chair, the actress Julianne Moore.

Blanchett took home the Volpi Cup for Best Actress for her performance as the composer and conductor Lydia Tár in Todd Field’s TÁR. Vanity Fair said Blanchett’s performance was a tremendous piece of acting that is her most piercing work in years.

Farrell’s prize, the Volpi Cup for Best Actor, recognized his role in Martin McDonagh’s The Banshees of Inisherin. The film, which brought back together Farrell with his In Bruges writer-director and co-star Brendan Gleason, is an adaptation of McDonagh’s play set during the 1920s in Ireland.

Taylor Russell was this year’s recipient of the Marcello Mastroianni Award for emerging performers, winning for her role in Bones & All, Luca Guadagnino’s picture co-starring Timothée Chalamet.

The winner of the Golden Lion, the best picture prize was awarded went to a documentary. All the Beauty and the Bloodshed from Laura Poitras, whose previous work includes Citizenfour and Risk (about Edward Snowden and Julian Assange, respectively), which profiles artist and activist Nan Goldin and her campaign within the art and philanthropy worlds against the Sackler Family.

And Luca Guadagnino won the award for Best Director and Martin McDonagh won for Best Screenplay.