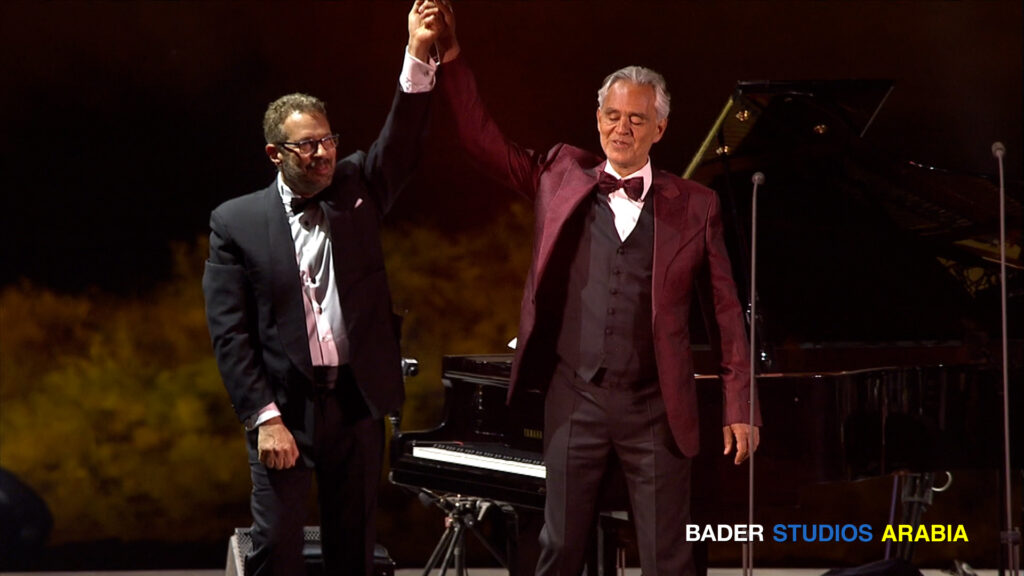 Bader Studios Arabia was once again on site for the Italian opera stars performance in Saudi Arabia. Italian opera tenor Andrea Bocelli enchanted an audience in AlUla in his first-ever performance within the walls of the ancient desert city of Hegra. This is the third performance in the Saudi Kingdom for Bocelli who performed for a limited number of concert-goers at the heritage site due to social distancing guidelines – the concert was just as spectator at his previous shows at Maraya Concert Hall during the Winter at Tantora Festival, which Bader covered and interviewed the tenor backstage.

The biggest surprise of the night was the maestro’s 9-year-old daughter Virginia Bocelli, making her Middle East debut with her father on the stage playing the guitar and singing the lyrics to the iconic Leonard Cohen famous version of “Hallelujah”. The master tenor called upon musicians from the Arabian Philharmonic, and was joined by special guests Loren Allred, Matteo Bocelli, soprano Francesca Maionchi and Eugene Kohn at the piano.

Hegra was built in the first century by the Nabataean kingdom and is an ancient desert city home to thousands of tombs cut into sandstone mountains. At least 100 tombs have detailed carved facades, a signature of the skilled Nabataean craftsmen of the time which Bocelli performed against a backdrop of 20 carved tombs of Al-Khuraymat. Archaeologists say the tombs are among the best preserved in Hegra, and feature elegant gynosphinxes which are spirit guardians with women’s heads, lions bodies and wings which make up the mountainside.