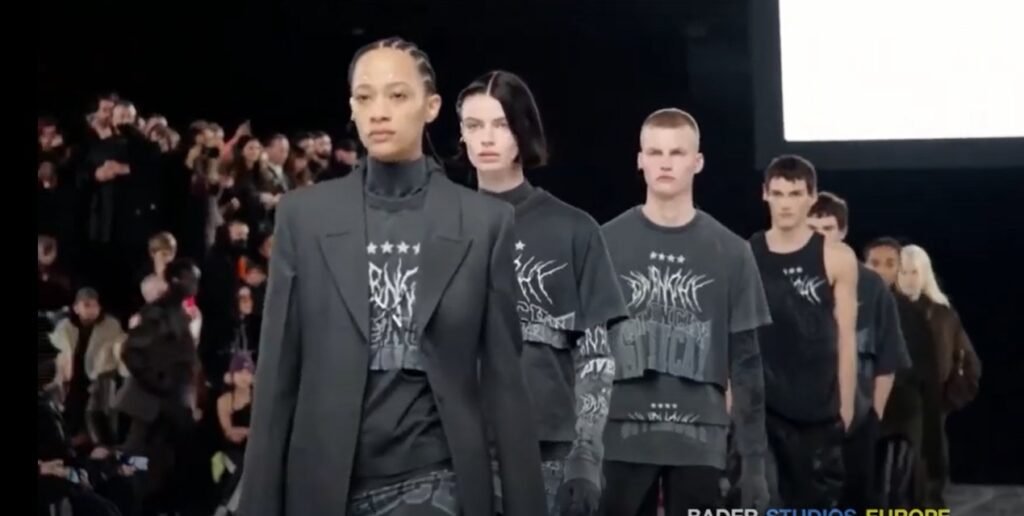 March 2022 – Paris, France – At the sprawling La Défense venue, which is one the largest in Europe, Matthew M. Williams’s second runway presentation for the luxury house, seemed more focused and to the point that in the past.

Bader Studios Europe was on the media riser to see the street wear collection unveiled with the mindset to be seen and purchased on the spot which is the theme of these shows.

As a former creative director in the music industry, Williams expresses himself by using music videos inside concert venues, where he feels he connects better with his audience

“It’s just about today. My work is really instinctual,” Williams said. He made that point clear by wearing black fabric gloves backstage and for his bow on stage. “With Covid, people have been wearing masks, so I’ve been exploring these balaclavas and gloves for that reason. It’s almost a new archetype people are using in their daily lives. In America, a lot of the kids of friends I know wear them.”

Williams went on to say, “I really wanted to create a synthesis of powerful, sophisticated femininity, with an interplay of multiple American and Parisian influences, sports and craftsmanship. Next to her stands a contemporary man with an instinct for chic nonchalance. On the runway, both are grounded by a sense of reality.”

What caught our eye with the collection was the introduction of the TK 360 sneaker, which helps build Givenchy’s growing footwear lineup. The shoe expresses a dress form dressed with sporty feel encouraging the possibilities of the entire shoe collection.