March 2017 Los Angeles: The story of Beauty and the Beast is “an institution” and “the crown jewel” as noted by David Hoberman producer and founder of Mandeville Films in reference to the 1991 Oscar winning original film.

However cinematic magic is being made once again with this latest version of Beauty and the Beast which is a co-production between Walt Disney Pictures and Mandeville films. The film, which stars Emma Watson of Harry Potter fame, and Downton Abbey actor Dan Stevens in the lead roles, debuts in March 2017.

Bader Media was part of the rush of reporters and paparazzi on the red carpet at the El Capitan Theatre premiere in Hollywood, CA as both Watson and Stevens, along with their co-stars Josh Gad, who assumes the role of LeFou; Gugu Mbatha-Raw, the castle-maid who is transformed into a flying swan-shaped feather duster; and Luke Evans, the narcissistic war veteran Gaston; praised the new film’s remarkable blend of live-action and computer animation.

The 2017 version of Beauty and the Beast also features an update of the 1991 original song – which was a duet with Celine Dion and Peabo Bryson – with the combination of John Legend and Ariana Grande. Legend was thrilled at the opportunity to remake the iconic Howard Ashman and Alan Menken composition for a new generation.

A retelling of the the animated classic, the “musical romantic fantasy” was directed by Bill Condon from a screenplay written by Stephen Chbosky and Evan Spiliotopoulos. 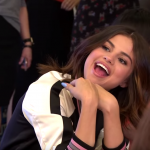