July 2014 – New Orleans LA: New Orleans Pelicans star Jrue Holiday and over 200 of his youngest fans at the Treme Recreation Center are on the road to better dental and overall health thanks to Colgate’s mobile dental vans!

The state of Louisiana represents an area that could greatly benefit from an initiative like NDA-HEALTH NOW. A Gallup-Healthways Well-Being Index survey conducted between January and December 2013 ranked Louisiana in the bottom five of states in which residents were most likely to have visited the dentist in the past 12 months.

It was also one of eight states that have ranked in the bottom ten every year since 2008. Similarly, a Pew Charitable Trust 2011 report entitled, “The State of Children’s Dental Health: Making Coverage Matter,” indicated that the state of Louisiana received a grade of “D” for its ability to ensure low-income children’s access to care.

Colgate Bright Smiles, Bright Futures is among the most far reaching, successful children’s oral health initiatives in the world. To date, the program has reached more than 700 million children and their families across 80 countries.

Viewers can learn more information by logging on to: http://ndaonline.org/nda-community-ou…

Bader TV News
LEGAL NOTICE: The information, data, software, photographs, graphics, text, images, logos, icons, typefaces, audio and video material, copyrights, and trademarks featured on this website as well as the domain names (registered and unregistered) associated with the foregoing are made available for the strict and sole use by recognized international, national and regional broadcast, satellite and cable news networks, programs and news websites associated with the broadcast networks and news magazines. For any other intended use, written permission from the Bader Group, LLC. must be obtained. Unauthorized use of any material on these websites could be a violation of US national copyright laws, UK Trademark Laws and German Intellectual Property Protection. Address any inquiries concerning usage of material on a Bader Media website, trademarks, service marks, copyrights, or designs to: info@bader.media - +1.212.744.5380 © 2023 Bader Group, LLC
WORLD’S TALLEST PANCAKE STACK RECORD SET IN TIMES SQUARE WITH EMERIL LAGASSE & TY PENNINGTON TO CELEBRATE NEW COOKING SHOW “ON THE MENU”Entertainment & Arts 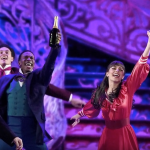