Ms. Sharapova was inspired to gather her friends together on the court and the red carpet to bring professional tennis back to the city of Los Angeles!

The Porsche Brand Ambassador and three-time winner of the Porsche Tennis Grand Prix (2012, 2013, 2014) chose Los Angeles for a specific reason. The city in southern California does not currently host a tennis tournament on either the main women’s or men’s tours. “I’ve been coming here to practice for so many years and felt part of the community here. I wanted to give the tennis fans in Los Angeles something back and support professional tennis in the US,” said Sharapova.

In addition to the world No. 18 Madison Keys, Sloane Stephens, Shelby Rogers and Laura Robson took part in the event, as did ATP Tour players Kei Nishikori and Jack Sock. Former top players Mardy Fish and Andy Roddick were also picking up their rackets again on Center Court of the UCLA Tennis Center on December 12 and 13.

Among Maria’s famous friends from sports and entertainment included: Chelsea Handler, Will Arnett and Justin Verlander of the Detroit Tigers. The Maria Sharapova + Friends tourney included women’s and legend’s singles, mixed doubles, and celebrity doubles matches and a comedy night.

On The Court: The Saturday Matches Were:
– Mixed Doubles (Roddick & Robson vs Fish & Keys)
– Men’s Singles (Roddick vs Chang)
– Women’s Singles (Sharapova vs Keys)
– Celebrity Mixed Doubles (Sharapova & Will Arnett vs Roddick & Chelsea Handler)
Match between Sharapova and Keys: “Maria Sharapova and Friends” opened with a mixed doubles between Madison Keys/Mardy Fish and Laura Robson/Andy Roddick, which the all-American pairing won 6-4. In the match that followed, the two American “veterans” gave little indication they had hung up their rackets. After battling for almost two hours, Mardy Fish finally edged Andy Roddick in a top class match 7-6, 4-6, 12-10.

The highlight for the fans on the first day was however the match between hostess
Maria Sharapova and the American tennis star Madison Keys who came close to putting a dampener on the champions on-court premier. In the end however Sharapova came out on top 6-7, 6-1, 11-9 in a thrilling and entertaining encounter. The day closed with a celebrity doubles when Maria Sharapova teamed up with comedy star Chelsea Handler to play Andy Roddick and the Canadian actor Will Arnett – with the better end for the women. 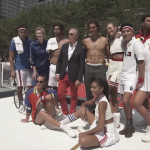 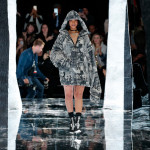