In the new, highly anticipated war drama based on Ben Fountain’s book of the same name, Ang Lee pushes the technological boundaries of filmmaking with cinematographer John Toll.

Lee’s film was shot in 3D at a speed of 120 frames per second — which is five times faster than a typical movie – and with a 4K resolution. Considered to be “hyper-realistic” and a radical departure from conventional filmmaking, Billy Lynn’s Long Halftime Walk offers audiences unprecedented levels of clarity and a unique physical presence to the action on the big screen.

The film is told from the point of view of 19-year-old Army private Billy Lynn who, along with his fellow soldiers in Bravo Squad, has been hailed as a hero and brought home for a victory tour after a harrowing Iraq battle.

Through a series of flashbacks, culminating at the spectacular halftime show of a Thanksgiving Day football game, the film reveals what really happened to the squad – contrasting the realities of the Iraq conflict with America’s celebration back home.

Lee’s cast includes some of the biggest names in Hollywood such as Kristen Stewart, Vin Diesel, and Steve Martin, along with newcomers such as Joe Alwyn who plays Billy Lynn.

At the red carpet ceremonies, Stewart lauded Lee for shooting the Billy Lynn at a historically higher film rate which encouraged her castmates to give more subtle performances. 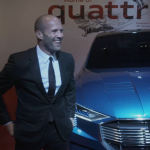